The tale of The Bookends begins in the storybook town of Stratford, Ontario where wafting notes of an Irish whistle brought together two couples on a warm summer’s eve. This perfect pairing of Cait & Pete, and Miriam & Errol – with a shelf-full of stories between them, became The Bookends. They are Celtic instrumentalists who keep audiences of all ages spellbound or fast-footed with their masterful arrangements. Filled with good natured banter, fascinating footnotes, and a steady switching of instruments, The Bookends deliver a show of energetic enrichment, and fantastically frenzied fun.

With an already encyclopedic knowledge of Celtic music, The Bookends set out on a quest to find the heart of the music of Ireland and Scotland. In the speckled light of stained glass windows, in libraries whose bones creaked with age, The Bookends pored over vellum and parchment pages in the tunebooks of ancient Celtic music masters. In time, they were endowed with ‘the tradition’ – an expression used by traditional players to describe a rarified form of the purest melodious expression. Only then did they draw on rock & roll, classical, world, and folk music to hone their own sound and pen their own compositions – with arrangements that compel even the hardest of metalheads to dance jigs and profess their adoration for The Bookends.

In addition to their own shows and tours, The Bookends have performed as the backing band for multi-platinum international sensation Loreena McKennitt. In 2021 they were headlined in the gold-standard of Canada’s festival scene: the Goderich Celtic Roots Festival. Also in 2021 they began a performance and collaboration relationship with the renowned Stratford Symphony Orchestra and were, fittingly, featured in a book – Just Us Folk – We Shift and Remain, by legendary journalist Jan Vanderhorst. In their 2019 jaunt to Ireland, the group played with artists from several Celtic supergroups, including Lúnasa, Kilfenora Céilí Band and Cherish the Ladies.

The Bookends released their first album, “Chapter One” in 2020. Roots Magazine Canada marveled that The Bookends “think outside the box” in their music and album promotion – crediting them with boosting the local economy during the pandemic lockdowns of 2020. The album has enjoyed airplay on radio and popular podcasts. Their next album is eagerly anticipated, and is set to be released in the fall of 2022.

Pete's roots span the British Isles as well as a strong Irish connection on his mother's side where music was always a part of any gathering. He is proud of his British, Irish and Canadian background and feels it has fuelled his lifelong passion for music.

Having started on electric guitar at a young age Pete learnt from the greats on his stereo while putting in countless hours of practice in his bedroom at home and in friends' basements. In his late teens he joined post-punk/rock outfit Spiral Scratch later renaming the band The Crawlin' Kingsnakes with a shift to a more roots, rock and blues sound. The band performed hundreds of shows over the next several years and had amazing opportunities to play with greats like George Thorogood, Johnny Winter, The Tragically Hip, Steve Earle, Mick Taylor (Rolling Stones) and many more roots and rock legends. Following the departure of the Kingsnakes' lead singer the remaining members of the band hired a new front man and changed the band's name to The Deportees in order to share the stage for their debut performance opening for The Black Crowes in late 1990. Pete then went on to join legendary Ontario band Suffer Machine in 1991 for a couple of years playing shows and festivals throughout the country. The band also shot a video with Genie award winning director Darrell Wasyk in 1993. Pete has spent a lot of time in recording studios producing numerous albums and compilations for many local independent music artists (Taplash, Julia Propellor, Adam West, Licorice, London Underground) as well as helping to design and package these releases.

Music has always been a major influence in Cait's life. Her musical journey started in early childhood learning to play the piano and it would remain her primary instrument for many years driven by a passion for classical music and film scores. Eventually, Cait began to explore other genres and instruments including death metal on organ, big band on baritone sax, African singing and drumming. She devoted time to creating original works both purely instrumental and as incidental music to stage productions. After studying music and linguistics at Carleton and later York University, and spending a few years working in film and commercial production in Toronto, Cait returned to her roots and moved back to Stratford to share the magic of this place with her husband, Pete.

Some years and two children later, while preparing for a family camping trip, Cait opted to pick up the whistle (because it's lighter and easier to pack than a piano!) and dove into the tradition of Celtic music and fell in love with everything from the haunting airs to the irresistible jigs and reels. When Pete decided to join in he fanned the flame and they both found themselves immersed in a beautiful history captured in the music of tradition. Now with The Bookends, Cait loves exploring the juxtaposition of these traditional tunes with the unique take the band puts on them.

Errol was born and raised in Calgary, Alberta, Canada and started playing the violin at age 4. Although he started studying classical music initially, Errol was first exposed to traditional fiddle music as a member of the Calgary Fiddlers and travelled on his first international tour to Scotland with the group at the age of 12. Errol then went on to be a founding member of the fiddle super-group Barrage and toured extensively for the better part of a decade playing for audiences around the world and recording on a number of studio albums and live performance broadcasts. He has appeared on numerous national television programs including the CBC, BBC (Blue Peter), RTL, and PBS and has performed live for dignitaries including HRH The Prince of Wales, the Governor General of Canada, the House of Saud, and the Prime Minister of Canada. Errol has also shared the stage with many other great artists such as Loreena McKennitt, Ashley MacIssac, Great Big Sea, and Mark O’Connor amongst others, and has performed on stages in more than 30 countries. Errol is also an accomplished Stone Mason and has since relocated to Stratford, Ontario with his family, where he continues to pursue his love of trad music with The Bookends.

Miriam was born in Germany and immigrated to Canada as a child. Surrounded by a musical family, she began playing classical piano at a young age, studying with the Royal Conservatory program. Growing up, Miriam discovered a love for improvisation, spending hours exploring the keyboard and playing with chord progressions. Over the years, she has shared the stage with a wide variety of musicians and vocalists in many different venues, developing the versatility to delve into unrehearsed performances. Miriam was first introduced to playing Celtic music in Calgary where she began playing keyboard for East Coast fiddler and singer/songwriter Heather Cameron. She has continuedto explore the Celtic sound on the piano and her non-traditional background has led to a unique approach to Celtic piano accompaniment. Although the piano is not a traditional Celtic instrument, Miriam is among a growing wave of young, talented pianists in the genre. She has appeared at various music festivals including the Mountain View Music Festival, Water Valley Celtic Festival and the David Thompson East Coast Music Festival. Since moving to Stratford, Ontario with her family, Miriam has also taken up the piano accordion and continues to explore the Celtic music tradition with The Bookends. 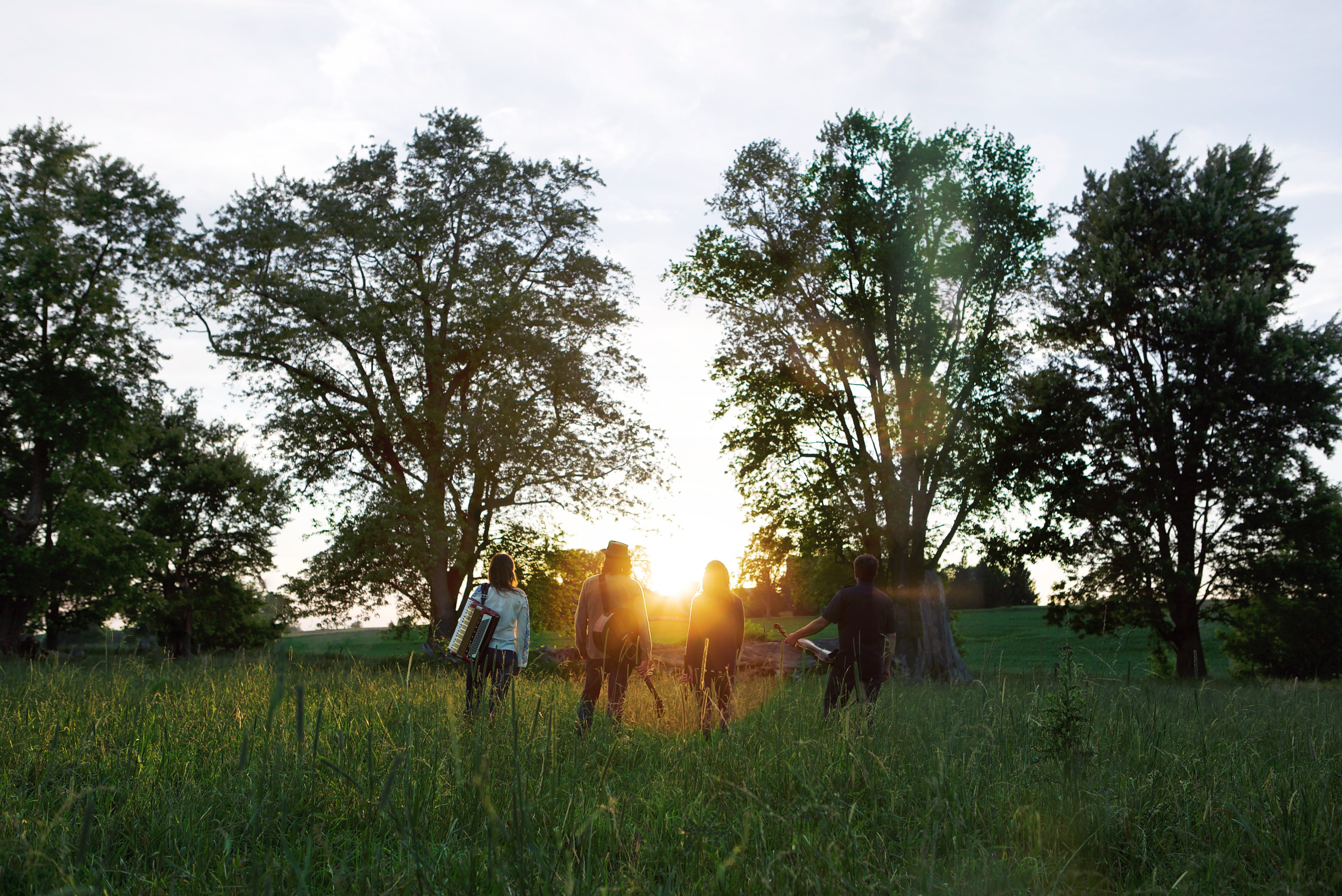 The Bookends out standing in a field